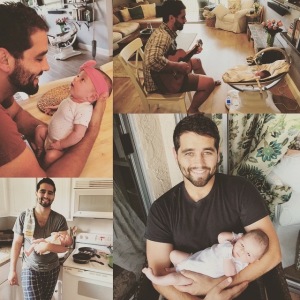 If you haven’t heard, I am the father of the most beautiful little girl ever, Daisy Jane. These past (fast) seven weeks have been amazing. New feelings. New experiences. Lots of new thoughts.

One of the reoccurring thoughts I have had as I look into the eyes of my little one has been, “If God calls you to marry, I wonder what your husband will be like?” From there, I began changing my question from passive, “I wonder what he will be like,” to the active, “What kind of man will I teach you to look for?” After all, as her father, it is my job (along with her ever wise mother) to train Daisy up in the love, knowledge, and wisdom of the Lord. A part of that wisdom is knowing what kind of man God calls her to marry.

So what kind of man will I teach my daughter to see as a potential husband? What standards will I set before her?

Man, being a daddy is hard stuff.

So, over the next 18+ years, I will slowly contribute to this blog series which I will title, “If You Want to Marry My Daughter…” For the first installment, I lay down the most basic and essential requirement a man must meet if he wants to marry my Daisy:

If you want to marry my daughter, you must be a Christian.

In many areas I am willing to give and take when it comes to young men to whom I will give my blessing in pursuit of my daughter’s hand.

I am willing to abide a short man,

even a man who is not a Texan (Lord, forgive me).

However, I cannot give my consent to a man who is not a follower of Christ. That would be absolutely unthinkable. (Taken from What He Must Be If He Wants to Marry My Daughter, 67)

Adding to the pot, I think the London Baptist Confession clearly shows that this isn’t just one dad’s hangup, but it is God’s command. Christians are forbidden from marrying non-Christians.

It is lawful for all sorts of people to marry, who are able with judgment to give their consent (Hebrews 13:3; 1 Timothy 4:3); yet it is the duty of Christians to marry in the Lord(1 Cor. 7:39); and therefore those who profess true religion, should not marry with infidels, or idolaters; neither should the godly be unequally yoked by marrying with such as are wicked in their life, or maintain damnable heresy (Nehemiah 13:25-27). (LBC, XXV, 4)

“As followers of Christ, our greatest delight will always be found in our obedience to His Word…How can a father who does not impress the importance of this principle (i.e. marrying a believer) on his daughter ever expect her to find delight? God has spoken clearly on this issue. There need be no confusion. And apart from our obedience in this matter, there will be no delight.”

I'm a Christian, husband, daddy, pastor, professor, and hope to be a friend to pilgrims on their way home.
View all posts by Dana Dill →
This entry was posted in Uncategorized and tagged daisy jane, dating, daughters, fatherhood, london baptist confession, marriage, motherhood, voddie baucham. Bookmark the permalink.