Favorite Quotes from “Ready Player One” 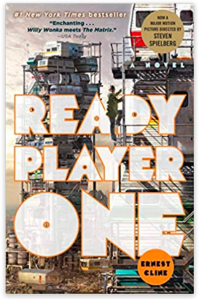 I recently enjoyed Ready Player One by Ernest Cline.

Here are some of my favorite quotes. Please note, I don’t necessarily agree with all the below quotes, but in one way or another find them helpful, intriguing, or illustrative of certain ideas or points of view.

An Angsty Teenager’s Take on Silly Religion. Fascinating (hilarious) when juxtaposed with a main character and plot infused with moral objectivity, virtue, and absolute truth.

“I wish someone had just told me the truth right up front, as soon as I was old enough to understand it. I wish someone had just said: “Here’s the deal, Wade. You’re something called a ‘human being.’ That’s a really smart kind of animal. Like every other animal on this planet, we’re descended from a single-celled organism that lived millions of years ago. This happened by a process called evolution, and you’ll learn more about it But trust me, that’s really how we all got here. There’s proof of it everywhere, buried in the rocks. That story you heard? About how we were all created by a super-powerful dude named God who lives up in the sky? Total bullshit. The whole God thing is actually an ancient fairy tale that people have been telling one another for thousands of years. We made it all up. Like Santa Claus and the Easter Bunny. “Oh, and by the way … there’s no Santa Claus or Easter Bunny. Also bullshit. Sorry, kid Deal with it.”

An Angsty Teenager’s Gospel of Enlightenment. The myth of our day.

“You’re probably wondering what happened before you got here. An awful lot of stuff, actually. Once we evolved into humans, things got pretty interesting. We figured out how to grow food and domesticate animals so we didn’t have to spend all of our time hunting. Our tribes got much bigger, and we spread across the entire planet like an unstoppable virus. Then, after fighting a bunch of wars with each other over land, resources, and our made-up gods, we eventually got all of our tribes organized into a ‘global civilization.’ But, honestly, it wasn’t all that organized, or civilized, and we continued to fight a lot of wars with each other. But we also figured out how to do science, which helped us develop technology. For a bunch of hairless apes, we’ve actually managed to invent some pretty incredible things. Computers. Medicine. Lasers. Microwave ovens. Artificial hearts. Atomic bombs. We even sent a few guys to the moon and brought them back. We also created a global communications network that lets us all talk to each other, all around the world, all the time. Pretty impressive, right?

An Angsty Teenager’s Take on Death. “But the evidence seems to suggest that nothing happens.” Except for that one guy that came back and told us some stuff (Luke 24).

“What happens when you die? Well, we’re not completely sure. But the evidence seems to suggest that nothing happens. You’re just dead, your brain stops working, and then you’re not around to ask annoying questions anymore. Those stories you heard? About going to a wonderful place called ‘heaven’ where there is no more pain or death and you live forever in a state of perpetual happiness? Also total bullshit. Just like all that God stuff. There’s no evidence of a heaven and there never was. We made that up too. Wishful thinking. So now you have to live the rest of your life knowing you’re going to die someday and disappear forever.

The Cold Unreality of Video Games & Virtual Life. Interesting to think that this take on the meaninglessness of video games and virtual life must also be applied to “real life” from a naturalistic perspective. For, in the end, all this doesn’t mean anything. Once the “Game Over” screen hits at our death, we fade to black and all our struggle, pain, victories, and achievements are forgotten. From a naturalistic perspective, all of us are “just another sad, lost, lonely soul, wasting (our lives) on a glorified video game” we call life.”

Then I paused and spent a moment staring at my rig. I’d been so proud of all this high-tech hardware when I’d first purchased it. But over the past few months, I’d come to see my rig for what it was: an elaborate contraption for deceiving my senses, to allow me to live in a world that didn’t exist. Each component of my rig was a bar in the cell where I had willingly imprisoned myself.

Standing there, under the bleak fluorescents of my tiny one-room apartment, there was no escaping the truth. In real life, I was nothing but an antisocial hermit. A recluse. A pale-skinned pop culture-obsessed geek. An agoraphobic shut-in, with no real friends, family, or genuine human contact. I was just another sad, lost, lonely soul, wasting his life on a glorified video game.

But not in the OASIS. In there, I was the great Parzival. World-famous and international celebrity. People asked for my autograph. I had a fan club . . . I was a legend. Nay, a god.

I am a happy slave to Jesus, thankful husband to Chawna, delighted daddy to Daisy Jane, Penny Lane, and Lottie Jo. I teach at Capo Valley Christian School & Biola University. I'm here on assignment (Acts 20:24).
View all posts by Dana Dill →
This entry was posted in Uncategorized. Bookmark the permalink.