Favorites Quotes from “Out of the Silent Planet” 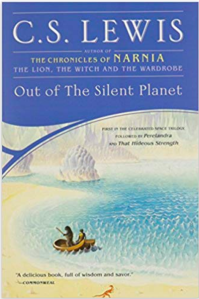 I recently enjoyed Out of the Silent Planet by C.S. Lewis.

Here are a few of my favorite quotes.

“‘Is the begetting of young not a pleasure maong the hrossa?’

‘It is a very great on, Hman. This is what we call love,’

‘If a thing is a pleasure, a hman wants it again. He might want the pleasure more often than the number of young that could be fed.’

It took Hyoi a long time to get the point.

‘You mean,’ he said slowly, ‘that he might do it not only in one or two years of his life but again?’

‘But why? Why would he want his dinner all day or want to sleep after he had slept? I do not understand.’

‘But a dinner comes every day. This love, you say, comes only once while the hross lives?’

‘But it takes his whole life. When he is young he has to look for his mate; and then he has to court her; then he begets youngl then he rears them; then he remember all this, and boils it inside him and makes it into poems and wisdom.’

‘But the pleasure he must be content only to remember?’

‘I do not understand.’

‘A pleasure is full grown only when it is remembered.  You are speaking , Hman, as if the pleasure were one thing and the memory another.  It is all one thing .  The Seroni could say it better than I say it now.  Not better than I could say it in a poem.  What you call remembering is the last part of pleasure, as the crah is the last part of a poem.  When you and I met, the meeting was over very shortly, it was nothing.  Now it is growing something as we remember it.  But sill we know very little about it.  What it will be when I remember it as I lie down to die, what it makes in me all my days till then–that is the real meeting.  The other is only the beginning of it.  You say you have poets in your world.  Do they not teach you this?’

“Perhaps some of them do,’ said Ransom. ‘But even in a poem does a hross never long to hear on splendid line over again?’

Hyoi’s reply unfortunately turned on one of those points in their language which Ransom had not mastered. There were two verbs which both, as far as he could see, meant to long or yearn; but the hrossa drew sharp distinction, even an opposition, between them. Hyoi seemed to him merely to be saying that everyone would long for it (wondelone) but no one in his senses could long for it (hluntheline).

‘And indeed,’ he continued, ‘the poem is a good example. For the most splendid line becomes fully splendid only by means of all the lines after it; if you went back to it you would find it less splendid than you thought. You would kill it. I mean in a good poem.’

‘A bent poem is not listened to, Hman.’

‘How could the life of a hnau be bent?’

‘Do you say, Hyoi, that there are no bent hrossa?’

. . . At last it dawned upon (Ransom) that it was not (the hrossa), but (Man), that were the puzzle. That the hrossa should have such instincts was mildly surprising; but how came it that the instincts of the hrossa so closely resembled the unattained ideals of that far-divided species Man whose instincts were so deplorably different? What was the history of Man?

‘All the same,’ said Ransom, unconsciously nettled on behalf of his own world, ‘Maleldil has let in the hnakra‘ (evil shark-like creatures)

‘Oh, but that is so different. I long to kill this hnakra as he also longs to kill me. I hope that my ship will be the first and I first in my ship with my straight spear when the blackjaws snap. And if he kills me, my people will mourn and my brothers will desire still more to kill him. But they will not wish that there were no hnéraki; nor do I. How can I make you understand, when you do not understand the poets? The hnakra is our enemy, but he is also our beloved. We feel in our hearts his joy as he looks down from the mountain of water in the north where he was born; we leap with him when he jumps the falls; and when winter comes, and the lake smokes higher than our heads, it is with his eyes that we see it and know that his roaming time is come. We hang images of him in our houses, and the sign of all the hrossa is a hnakra. In him the spirit of the valley lives; and our young play at being hnéraki as soon as they can splash in the shallows.’

‘And then he kills them?’

‘Not often them. The hrossa would be bent hrossa if they let him get so near. Long before he had come down so far we should have sought him out. No, Hm¯an, it is not a few deaths roving the world around him that make a hnau miserable. It is a bent hnau that would blacken the world. And I say also this. I do not think the forest would be so bright, nor the water so warm, nor love so sweet, if there were no danger in the lakes. I will tell you a day in my life that has shaped me; such a day as comes only once, like love, or serving Oyarsa in Meldilorn. Then I was young, not much more than a cub, when I went far, far up the handramit to the land where stars shine at midday and even water is cold. A great waterfall I climbed. I stood on the shore of Balki the pool, which is the place of most awe in all worlds. The walls of it go up for ever and ever and huge and holy images are cut in them, the work of old times. There is the fall called the Mountain of Water. Because I have stood there alone, Maleldil and I, for even Oyarsa sent me no word, my heart has been higher, my song deeper, all my days. But do you think it would have been so unless I had known that in Balki hneraki dwelled? There I drank life because death was in the pool. That was the best of drinks save one.’

‘What one?’ asked Ransom.

‘Death itself in the day I drink it and go to Maleldil.’

He was one with them. That difficulty which they, accustomed to more than one rational species, had perhaps never felt, was now overcome. They were all hnau. They had stood shoulder to shoulder in the face of an enemy, and the shapes of their heads no longer mattered.  And he, even Ransom, had come through it and not been disgraced. He had grown up.

Man Wants to Be Little Oyarsas

“They were astonished of what he had to tell them of human history: of war, slavery, and prostitution.

‘It is because they have no Oyarsa,’ said one of the pupils.

‘It is because everyone of them wants to be a little Oyarsa himself,’ said Augray.

‘They cannot help it,’ said the old sorn. ‘There must be rule, yet how can creatures rule themselves? Beasts must be ruled by hnau and hnau by eldila and eldila by Madleldil. These creatures shave no eldila. They re like on trying to lift himself by his own hair – or one trying to see over a whole country when he is on a level with it – like a female trying to beget young on herself.’

I am a happy slave to Jesus, thankful husband to Chawna, delighted daddy to Daisy Jane, Penny Lane, and Lottie Jo. I teach at Capo Valley Christian School & Biola University. I'm here on assignment (Acts 20:24).
View all posts by Dana Dill →
This entry was posted in Uncategorized and tagged Favorite Quotes. Bookmark the permalink.