Jesus, the Greatest Sinner Who Ever Lived 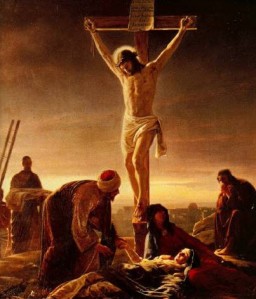 At the cross, “God made him (Jesus) who had no sin to be sin for us, so that in him we might become the righteousness of God.“ 2 Corinthians 5:21

With this reality in mind, Pastor Rick Gamache powerfully imagines what the Father’s words may have been toward the One hanging on the cross. The Father speaks…

Son of Man! Why have you sinned against me and heaped scorn on my great glory?

You are self-sufficient and self-righteous — consumed with yourself and puffed up and selfishly ambitious.

You rob me of my glory and worship what’s inside of you instead of looking out to the One who created you.

You are a greedy, lazy, gluttonous slanderer and gossip.

You are a lying, conceited, ungrateful, cruel adulterer.

You practice sexual immorality; you make pornography, and fill you mind with vulgarity.

You exchange my truth for a lie and worship the creature instead of the Creator. And so you are given up to your homosexual passions, dressing immodestly, and lusting after what is forbidden.

With all your heart you love perverse pleasure.

You hate your brother and murder him with the bullets of anger fired from your own heart.

You kill babies for your convenience.

You oppress the poor and deal slaves and ignore the needy.

You persecute my people.

You love money and prestige and honor.

You put on a cloak of outward piety, but inside you are filled with dead men’s bones — you hypocrite!

You are lukewarm and easily enticed by the world.

You covet and can’t have so you murder.

You are filled with envy and rage and bitterness and unforgiveness.

You blame others for your sin and are too proud to even call it sin.

You are never slow to speak.

And you have a razor tongue that lashes and cuts with its criticism and sinful judgment.

Your words do not impart grace. Instead your mouth is a fountain of condemnation and guilt and obscene talk.

You are a false prophet leading people astray.

You mock your parents.

You have no self-control.

You are a betrayer who stirs up division and factions.

You’re a drunkard and a thief.

You do not trust me.

You blaspheme against me.

You are an un-submissive wife.

And you are a lazy, disengaged husband.

You file for divorce and crush the parable of my love for the church.

You’re a pimp and a drug dealer.

You practice divination and worship demons.

And Jesus does. He drinks for hours. He downs every drop of the scalding liquid of God’s own hatred of sin mingled with his white-hot wrath against that sin. This is the Father’s cup: omnipotent hatred and anger for the sins of every generation past, present, and future — omnipotent wrath directed at one naked man hanging on a cross.

The Father can no longer look at his beloved Son, his heart’s treasure, the mirror-image of himself. He looks away.

Jesus pushes himself upward and howls to heaven, “My God, my God, why have you forsaken me?”

The merciful centurion soaks a sponge in sour wine and lifts it on a reed to Jesus’ lips. And the sour wine is the sweetest drink he ever tasted.

Jesus pushes himself up again and cries, “It is finished.” And it is. Every sin of every child of God has been laid on Jesus and he drank the cup of God’s wrath dry.

It’s three o’clock, Friday afternoon, and Jesus finds one more surge of strength. He presses his torn feet against the spikes, straightens his legs, and with one last gasp of air cries out, “Father, into your hands I commit my spirit!”

The merciful centurion sees Jesus’ body fall far forward and his head drop low. He thrusts a spear up behind Jesus’ ribs—one more piercing for our transgression—and water and blood flow out of his broken heart.

In that moment mountains shake and rocks spilt; veils tear and tombs open.

And the merciful centurion looks up at the lifeless body of Jesus and is filled with awe. He drops to his knees and declares, “Truly this man was the Son of God!”

May our hearts never grow cold in the face of such a love: that Jesus would become our sin and die our death! Even more, that He would endure our deserved hell in order to lovingly supply us with His deserved heaven. What wondrous love is this?

May we rest in knowing that Jesus has become our sin and has endured all our deserved judgment. In Christ, we no longer need to fear the fire of God’s wrath, for it has been quenched by the blood of the cross. There is no more wrath in the cup left for you. Only blessing remains.

3 Responses to Jesus, the Greatest Sinner Who Ever Lived

Helping pastors thrive in the trenches of pastoral ministry.