He Was Just a Sheep: A Tribute to Grandpa Dill 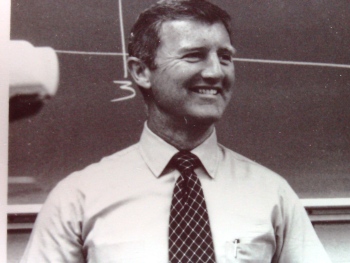 If interested, my grandfather, whom this is about, wrote a short memoir of his life and God’s grace to him. You can access that here.

When George Washington died, the country mourned. Countless articles, stories, and eulogies were written in his honor. Many of them embellished Washington’s life and achievements so much he seemed less a man and more a god.

Seeing these embellishments, Abigal Adams, wife of second president John Adams, grew frustrated. Not because she disliked or disrespected Washington, but the contrary. She thought the fanciful stories that divinized Washington took away the true honor that he deserved. In that vein, she wrote these words, “Simple truth is his best, his greatest eulogy. She alone can render his fame immortal.” For her, honoring Washington was to tell the simple truth about him.

He Was An Extraordinary Man

Whether you knew my grandfather closely for 63 years, like my grandma, or only for the last few months of his life, I am confident you’d agree with me in saying, the same is true for him. The greatest way to honor Glenn Dill is to tell the simple truth about him. For he was an extraordinary man.

Glenn Dill Was a Humble Man

If you read Glenn’s short biography written on the back of your programs, you’ll quickly see he had many accomplishments to be proud of. Yet, though we all marvel at his accomplishments, he never seemed notice them at all. He was quick to genuinely praise his friends and family, but he never praised himself.

Though he was successful in the military world, the business world, and the academic world, I have never heard anyone accuse my grandpa of being a ‘workaholic’ or being unable to stop and rest. Though he lived in affluent Southern California, he never cared to keep up with the Joneses – he just prayed for them. He knew what hard work was, but he also knew how to sit still and be at peace. Glenn Dill was the rarest of creatures: a truly content and satisfied man.

As far back as I can remember, I have always known my grandfather to be a man of wholeness. There was nothing hollow in him. Lots of people seem like they’ve got everything together, but when they get knocked on, you hear the hollowness. But, grandpa, he was whole all the way down to his bones.

Glenn Dill Was a Man That Made Others Flourish

I wonder if you remember the old story of King Midas. Whatever he touched turned to gold. That’s a lot like my grandfather, yet those he touched weren’t made into gold. Instead, his touch made other people flourish. His wholeness brought wholeness to those around him. Glenn Dill made people – his wife, his family, his church, his coworkers, his students – flourish.

To use the language of Psalm 23, one of grandpa’s favorite Scriptures and our text this afternoon: Glenn was an amazing sheep only because He had an amazing Shepherd. So, to understand Glenn, you must understand Jesus. Once you see what Jesus is like as a Shepherd, you’ll quickly see why Glenn was the man he was.

In Psalm 23, we’re given three truths about what kind of Shepherd Jesus is.

1) Jesus is a Personal Shepherd

In verse one we read this profound statement: “The Lord is my Shepherd.” Please notice the intimately personal language used here. It does not say “we” or “us” or “our,” but “my Shepherd.” Knowing Jesus is not a “long distance relationship.” Those who know Jesus do not know him merely as a Shepherd or the Shepherd, but my Shepherd.

Why was my grandpa’s life so incredible? Because Jesus was his shepherd. Because Jesus personally shepherded him through His Word, the Bible.

Friends, I am so glad you marvel at the love, wisdom, and life of my grandfather, but please understand this; Glenn was just a follower, a follower of Jesus. And that’s his glory! That’s also one of the reasons he was so humble! He understood that any good thing that came from him was only because his Shepherd led him. Glenn was a giant in the eyes of men, because he saw himself as a sheep in the arms of his Shepherd. He knew his good life was the result of following his Good Shepherd. How could take credit! Does a sheep boast? He joyfully proclaimed, “The Lord is my shepherd.”

2) Jesus is a Providing Shepherd

In the second part of verse one, we read about what Jesus does for those who follow Him: “The Lord is my Shepherd; I shall not want.” We live in a world of want! Something more, something bigger, something better. But, when we get the bigger house or the better job or the higher paycheck, we find ourselves just as empty and dissatisfied as before. We’re thirsty and all we drink is salt water!

So these words should shock us! “The Lord is my Shepherd; I shall not want.” How can the Psalmist say that? We find the answer in verse 2: “He makes me lie down in green pastures. He leads me beside still waters.” All his wants are provided for. When his belly grumbles, green grass! When his mouth dries up, still and pure water. The world’s shepherds have only crab grass and salt water to offer. But Jesus is a Shepherd who provides for His sheep.

The contentment that marked every decade of my grandfather’s life did not come because he stoically accepted whatever circumstance he found himself in. His satisfaction was not because he trained himself to not have high expectations or strong desires. He was satisfied because Jesus filled his hunger and quenched his thirst every day. In seasons of abundance, grandpa thanked his Shepherd for his kindness. In times of little, grandpa enjoyed Jesus Himself as his treasure and, like Mary, was content to simply be at his feet. He was content not because of what Jesus gave, but because of who Jesus was. Glenn was content because in Jesus his every need and every want was provided for.

Jesus is personal Shepherd and a Providing Shepherd. Last, let us see…

3) Jesus is a Restoring Shepherd

Read verse 3 with me: “He restores my soul.” (3a). Glenn was a whole man because he was a restored man. Jesus restored his soul. Every one of us is born with a huge crack in our soul. We’re broken and we know it. Some try to fix the crack with morality or religious activities, but the glue never holds. Others just ignore the crack and try to fill themselves with the pleasure or praise or paychecks as often as they can. But since we’re cracked, those small joys leak out of us even faster than they came. So, we continue cracked and empty. So, Jesus has to “restore our souls.” He alone has the glue to fix us and the life-giving water to fill us up.

Some of you may be thinking to yourself, “Young man, you’re overselling!” And to you, I say this: Look at the eight decades of my grandpa’s life; that is not a cracked and leaking man. That is not a drain, but a fountain! That is a man whose soul has been restored.

But what does that mean? To be restored? Is it just a frame of mind? A new subjective experience? How did Jesus restore my grandpa? Though much could be said, here are the most foundational ways Christ restored the soul of grandpa.

In the last few weeks of grandpa’s life my grandpa was in hospice care in Coronado. I was visiting him and grandma along with Drew, the Prince’s, and the Burt’s. He was so weak he could barely speak a whisper. The final stages of heart failure we’re setting in and the end was near. As he lay in bed with all of us gathered around, he began to stir. It looked like he was trying to speak. But, after we quieted down, we realized he wasn’t speaking, but he was singing a hymn. As he started he lifted his fingers to invite us to sing with him. As his body was dying and his heart was failing, his soul was overflowing in praise to God. As he walked toward death, he led us in worship. That is a restored soul.

As we look at the Shepherd whom Glenn followed, I hope now it’s obvious that Glenn was who he was because of Whose he was. He was a great man because every day he followed The Great Shepherd. To use the words of one of his favorite songs, “No one ever cared for (him) like Jesus.”

Why Does Jesus Do This?

As we come to a close, I would like to ask one more question: Why does Jesus do this? The last part of verse 3 tells us: “He leads me in paths of righteousness for His name’s sake.” Jesus Shepherded my grandpa so he and all the world would see how good He – Jesus – actually is. His care for grandpa was not ultimately about grandpa or us. He cared for grandpa so through grandpa’s life we could all see that there is no one like Jesus.

Jesus wanted grandpa to be a window and not a wall. If a wall is boring and dreary, we can paint it or put pictures or artwork on it to make it beautiful. When a wall is beautiful, everyone marvels at the wall and praises the wall it for its beauty. However, if there is a greater beauty that is just outside the wall – an ocean view, a mountain, a beautiful garden – we don’t paint it or hang pictures on it, but we install a window so the greater beauty outside could be marveled at and enjoyed. Friend, Jesus shepherded my grandfather to be a window; not so we could look at him and his life and marvel, but so we can look through his life and marvel at the God he loved and worshiped. Jesus lead Glenn Dill in the path’s of righteousness “for His Name’s sake.” He shepherded Glenn so, through Glenn, we all could see Jesus – the Greater Beauty.

If Grandpa Visited His Own Funeral

If Grandpa was here today, there are some things I’m sure he’d do. First, he’d hug and kiss my grandmother and convince her he’s better than ever. Second, he’d cry a lot. Like a lot a lot.

Once he finally finished crying, he’d go on to thank us, somewhat embarrassed, for honoring him and then quickly and joyfully plead for us to look through him to Jesus. He would tell us to look to Jesus’ person, to believe Jesus’ words, to trust Jesus’ promises, and to follow Jesus’ lead. He would tell us that Jesus has been his Good Shepherd and that He will be your Shepherd to if you give your life to Him.

What a man he was.

What a Shepherd he followed.

I am a happy slave to Jesus, thankful husband to Chawna, delighted daddy to Daisy Jane, Penny Lane, and Lottie Jo. I teach at Capo Valley Christian School & Biola University. I'm here on assignment (Acts 20:24).
View all posts by Dana Dill →
This entry was posted in Uncategorized and tagged death, discipleship, family, funeral. Bookmark the permalink.